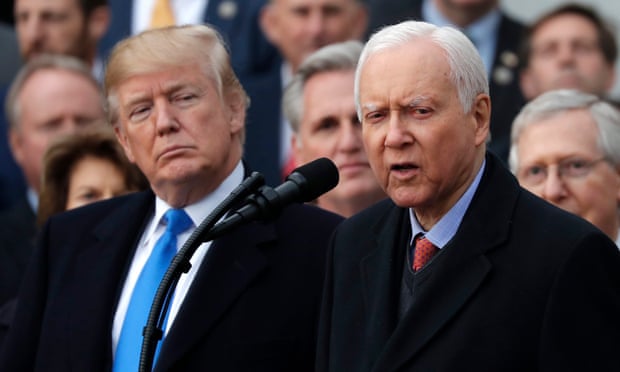 Orrin Hatch, the longest-serving Republican in the US Senate, announced on Tuesday that he will retire at the end of the year. In doing so, he made room for a potential Senate bid by former presidential candidate Mitt Romney.

“I’ve always been a fighter,” Hatch, 83, said in a video statement. “I was an amateur boxer in my youth, and I brought that fighting spirit with me to Washington. But every good fighter knows when to hang up the gloves. And for me, that time is soon approaching.”

Shortly after Hatch’s announcement, Romney issued a short statement praising the Utah senator “for his more than 40 years of service to our great state and nation”. He did not address his own ambitions.

Hatch is the longest-serving Republican senator of all time, having represented Utah since 1977. Recently, he has faced competing pressures about his political future.

Donald Trump had lobbied him to run again, particularly after Hatch played an instrumental role as chairman of the Senate finance committee in crafting the overhaul of the US tax code, which was passed last month. Hatch was also a key player in the decision to shrink two Obama-era national monuments that Trump announced in Utah.

Later on Tuesday, Trump tweeted his congratulations “on an absolutely incredible career” and said Hatch had “been a tremendous supporter”.

“I will never forget the (beyond kind) statements he has made about me as president,” Trump wrote. “He is my friend and he will be greatly missed in the US Senate!”

Trump’s support has also been viewed as a move to stop Romney, who has privately expressed interest in Hatch’s seat, from declaring his candidacy. Hatch has been one of Trump’s most ardent defenders; Romney has been among the most vocal critics of Trump, as both candidate and president.

Romney is a former governor of Massachusetts but he is a Mormon and a Utah resident. He played a critical role in managing the 2002 Winter Olympics in Salt Lake City.

A recent polled found that three in four Utahns thought Hatch should not seek an eighth term. A plurality expressed support for Romney taking his place.

Although Romney sought and secured Trump’s endorsement when he ran for the White House in 2012, the two engaged in a high-profile feud during the 2016 primary after Romney publicly urged his party not to nominate Trump. In a March 2016 speech, Romney called Trump “a phony” and “a fraud”.

Trump hit back, stating that Romney had begged for his endorsement in 2012. “I could have said, ‘Mitt, drop to your knees’ – he would have dropped to his knees,” Trump said.

The two briefly appeared willing to bury the hatchet after Trump won the presidency and considered Romney for secretary of state. Trump’s longtime ally Roger Stone, however, said the president-elect had only interviewed Romney as payback, “in order to torture him”.

Romney has continued to be a critic. Last summer, after Trump blamed both sides for violence in Charlottesville, Virginia in which a white supremacist drove his car into counter-protesters, killing one and injuring several, Romney called on the president to apologize.

“Whether he intended to or not, what he communicated caused racists to rejoice, minorities to weep, and the vast heart of America to mourn,” Romney said.

White House press secretary Sarah Sanders said at Tuesday’s briefing she had not spoken to the president about whether he would support any attempt by Romney to succeed Hatch in the Senate.

“The president certainly has the greatest and deepest amount of respect for Senator Hatch and his over four decades of experience in the Senate,” she said.

Romney has until 15 March to file paperwork and run for Hatch’s seat.

Pakistan summons US ambassador over Trump’s ‘lies and deceit’ tweet

Hong Kong police on Jan. 5 arrested 53 people in dawn raids on democracy activists in the biggest crackdown since China last year imposed a security law which opponents say is aimed at quashing dissent in the former British colony.

U.S. Secretary of State Pompeo last week warned of fresh sanctions in response to the arrests of pro-democracy activists in Hong Kong. That warning came a day after supporters of Republican President Donald Trump on Jan. 6 stormed Congress in a bid to overturn his November election defeat, prompting China’s state media to accuse U.S. politicians of “double standards.”

Action on Friday would come just days before Trump is due to leave office and be succeeded by Democrat Joe Biden next Wednesday and would be the latest in a series targeting China, which analysts see as a bid driven by Pompeo to lock in a tough approach to Beijing.

The State Department did not immediately respond to a request for comment.

Trump has pursued hard-line policies toward China on issues ranging from trade to espionage and the coronavirus. Relations plummeted to their worst level in decades when he ramped up rhetoric in his unsuccessful November re-election campaign.

His administration has already imposed sanctions on Chinese officials for their actions involving the pro-democracy movement and other alleged rights abuses, and last July declared an end to the territory’s privileged economic status under U.S. law.

The Trump administration took another swipe at China and its biggest companies on Thursday, imposing sanctions on officials and companies for alleged misdeeds in the South China Sea and imposing an investment ban on nine more firms.

Last Saturday, Pompeo said he was lifting restrictions on contacts between U.S. officials and counterparts in Taiwan, a move that greatly angered Beijing, which considers the island a renegade province. (Reporting by Humeyra Pamuk; additional reporting by David Brunnstrom; editing by Jonathan Oatis)