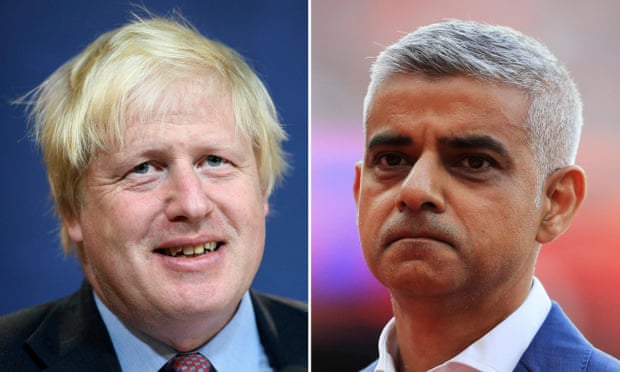 This article titled “Boris Johnson attacks Labour in row over Donald Trump’s cancelled visit” was written by Peter Walker and Heather Stewart, for The Guardian on Friday 12th January 2018 18.54 UTC

Downing Street has accused Jeremy Corbyn and Sadiq Khan of jeopardising relations with America for telling Donald Trump he is not welcome in Britain, after the US president called off a planned visit to London in the face of likely mass protests.

In a move that reinforces Theresa May’s determination to remain publicly close to Trump, despite accusations of racism and his liaisons with the far right, Downing Street backed an accusation from the foreign secretary, Boris Johnson, that Labour was risking transatlantic ties.

After Trump confirmed in the early hours of Friday that he would not come to officially open the new US embassy, Khan, the London mayor, said the president was not welcome in the city and had “finally got that message”.

Corbyn previously called for people to protest when Trump attended the embassy opening to send the president “a clear message” on actions such as his retweets of the far-right Britain First group.

Johnson tweeted : “The US is the biggest single investor in the UK – yet Khan & Corbyn seem determined to put this crucial relationship at risk. We will not allow US-UK relations to be endangered by some puffed up pompous popinjay in City Hall.”

The comment initially seemed to take No 10 by surprise and a spokesman initially dismissed the idea that Khan had damaged relations: “No, the US and the UK are natural resilient strong partners and allies and we do more together than any two countries in the world.”

But soon afterwards, Johnson’s comments were endorsed. A Downing Street source said: “Boris expresses himself in his own inimitable way – but we agree that any risk to the crucial US-UK relationship is not in our country’s best interests.”

Trump tweeted that he would not visit to open the embassy, saying the decision was because Barack Obama had sold the previous building in Grosvenor Square “for peanuts” and built an expensive replacement in a poor location in south London. In fact, the move was first planned when George W Bush was president.

Trump is still due to make a state visit to the UK, following an invitation made by May when she visited him shortly after his inauguration. This has been placed on hold, again seemingly due to the threat of protests.

Khan said: “It appears that President Trump got the message from the many Londoners who love and admire America and Americans but find his policies and actions the polar opposite of our city’s values of inclusion, diversity and tolerance.

“His visit next month would, without doubt, have been met by mass peaceful protests. This just reinforces what a mistake it was for Theresa May to rush and extend an invitation of a state visit in the first place.”

The London mayor, who has previously criticised Trump over his comments on terror attacks and immigration policy targeting Muslims, will reiterate his opposition in a speech on Saturday.

Populist movements are “playing on people’s worst fears and creating space for extreme views on immigration, diversity and equality”, Khan is due to tell the Fabian Society’s annual conference. “We’ve seen the impact of this in the US and we cannot allow this narrative to take hold in Britain.”

A Downing Street spokesman said there had never been a confirmation that Trump would open the embassy: “As we’ve said a number of times, a state visit invitation has been extended and accepted, and we will confirm the details in due course.”

He said May and Trump enjoyed a good relationship, adding: “The US is one of our oldest and most valued allies, and our strong and deep partnership will endure.”

Related: The fabulous new US embassy is best not tainted by a Trump visit | Oliver Wainwright

The president’s complaints about the new embassy building were contradicted by the US ambassador to the UK, Woody Johnson, who was appointed by Trump.

Writing in London’s Evening Standard newspaper, Johnson said the move from central London to Nine Elms, next to Battersea, was forced by security concerns after 11 September. The new building was the most advanced US embassy in the world and “did not cost the US taxpayer a cent”, he said, being financed by the sale of the old site and other London properties.

It had been expected that Trump would use the embassy visit to hold meetings with May. Officials had been examining plans for him to meet the Queen without a full-blown state banquet.

Hong Kong police on Jan. 5 arrested 53 people in dawn raids on democracy activists in the biggest crackdown since China last year imposed a security law which opponents say is aimed at quashing dissent in the former British colony.

U.S. Secretary of State Pompeo last week warned of fresh sanctions in response to the arrests of pro-democracy activists in Hong Kong. That warning came a day after supporters of Republican President Donald Trump on Jan. 6 stormed Congress in a bid to overturn his November election defeat, prompting China’s state media to accuse U.S. politicians of “double standards.”

Action on Friday would come just days before Trump is due to leave office and be succeeded by Democrat Joe Biden next Wednesday and would be the latest in a series targeting China, which analysts see as a bid driven by Pompeo to lock in a tough approach to Beijing.

The State Department did not immediately respond to a request for comment.

Trump has pursued hard-line policies toward China on issues ranging from trade to espionage and the coronavirus. Relations plummeted to their worst level in decades when he ramped up rhetoric in his unsuccessful November re-election campaign.

His administration has already imposed sanctions on Chinese officials for their actions involving the pro-democracy movement and other alleged rights abuses, and last July declared an end to the territory’s privileged economic status under U.S. law.

The Trump administration took another swipe at China and its biggest companies on Thursday, imposing sanctions on officials and companies for alleged misdeeds in the South China Sea and imposing an investment ban on nine more firms.

Last Saturday, Pompeo said he was lifting restrictions on contacts between U.S. officials and counterparts in Taiwan, a move that greatly angered Beijing, which considers the island a renegade province. (Reporting by Humeyra Pamuk; additional reporting by David Brunnstrom; editing by Jonathan Oatis)

BATON ROUGE, La. (AP) — Luke Letlow, Louisiana’s incoming Republican member of the U.S. House, died Tuesday night from complications related to COVID-19 only days before being sworn into office. He was 41.

“The family appreciates the numerous prayers and support over the past days but asks for privacy during this difficult and unexpected time,” Bautsch said in a statement. “A statement from the family along with funeral arrangements will be announced at a later time.”

“Luke had such a positive spirit, and a tremendously bright future ahead of him. He was looking forward to serving the people of Louisiana in Congress, and we were excited to welcome him to our delegation where he was ready to make an even greater impact on our state and our nation,” they said in a statement.

The state’s newest congressman, set to take office in January, was admitted to a Monroe hospital on Dec. 19 after testing positive for the coronavirus disease. He was later transferred to the Shreveport facility and placed in intensive care.

Letlow, from the small town of Start in Richland Parish, was elected in a December runoff election for the 5th District U.S. House seat representing central and northeastern regions of the state, including the cities of Monroe and Alexandria.

He was to fill the seat being vacated by his boss, Republican Ralph Abraham. Letlow had been Abraham’s chief of staff and ran with Abraham’s backing for the job.

“COVID-19 has taken Congressman-elect Letlow from us far too soon,” the Democratic governor said in a statement. “I am heartbroken that he will not be able to serve our people as a U.S. representative, but I am even more devastated for his loving family.”

Before working for Abraham, Letlow had worked for former Gov. Bobby Jindal’s administration. Jindal’s one-time chief of staff, Timmy Teepell, described Letlow on Twitter as “a good man with a kind heart and a passion to serve. He loved Louisiana and his family. He was a brother and I’m heart broken he’s gone.”

Letlow is survived by his wife, Julia Barnhill Letlow, and two children.

U.S. Sen. Bill Cassidy, a Republican and doctor who tested positive for COVID-19 earlier this year and has since recovered, posted in a Twitter video: “It just, just, just, just brings home COVID can kill. For most folks it doesn’t, but it truly can. So, as you remember Luke, his widow, his children in your prayers, remember as well to be careful with COVID.”

The forthcoming “Borat” sequel reportedly features Rudy Giuliani engaging in provocative behavior with a woman he’d been told was a reporter.

(The Hill) — The forthcoming “Borat” sequel reportedly features Rudy Giuliani engaging in provocative behavior with a woman he’d been told was a reporter.

The adviser to President Trump appears to have unknowingly participated in “Borat Subsequent Moviefilm,” the comedy starring Sacha Baron Cohen that is poised to be released Friday on Amazon Prime Video.

According to multiple reports, Giuliani sits down for an interview at a New York hotel with the character Tutar, Borat’s teenage daughter who’s posing as a TV journalist and was played by 24-year-old actress Maria Bakalova.

The 76-year-old former New York mayor is heard complimenting the supposed reporter and following her to a bedroom, where eventually he stretches out on the bed.

Vanity Fair describes the scene captured on hidden cameras, saying of Giuliani, “His hand is in his pants. Watching it, your brain turns into an exclamation point.”

Cohen, as Borat, then reportedly runs into the hotel room sporting a bikini and exclaiming, “She’s 15. She’s too old for you.”

Giuliani did not respond to The Hill’s request for comment.

He told the New York Post in July that he had agreed to participate in what he believed was an interview about the Trump administration’s COVID-19 response.

“This person comes in yelling and screaming,” Giuliani said of Cohen, “and I thought this must be a scam or a shake-down, so I reported it to the police. He then ran away.”