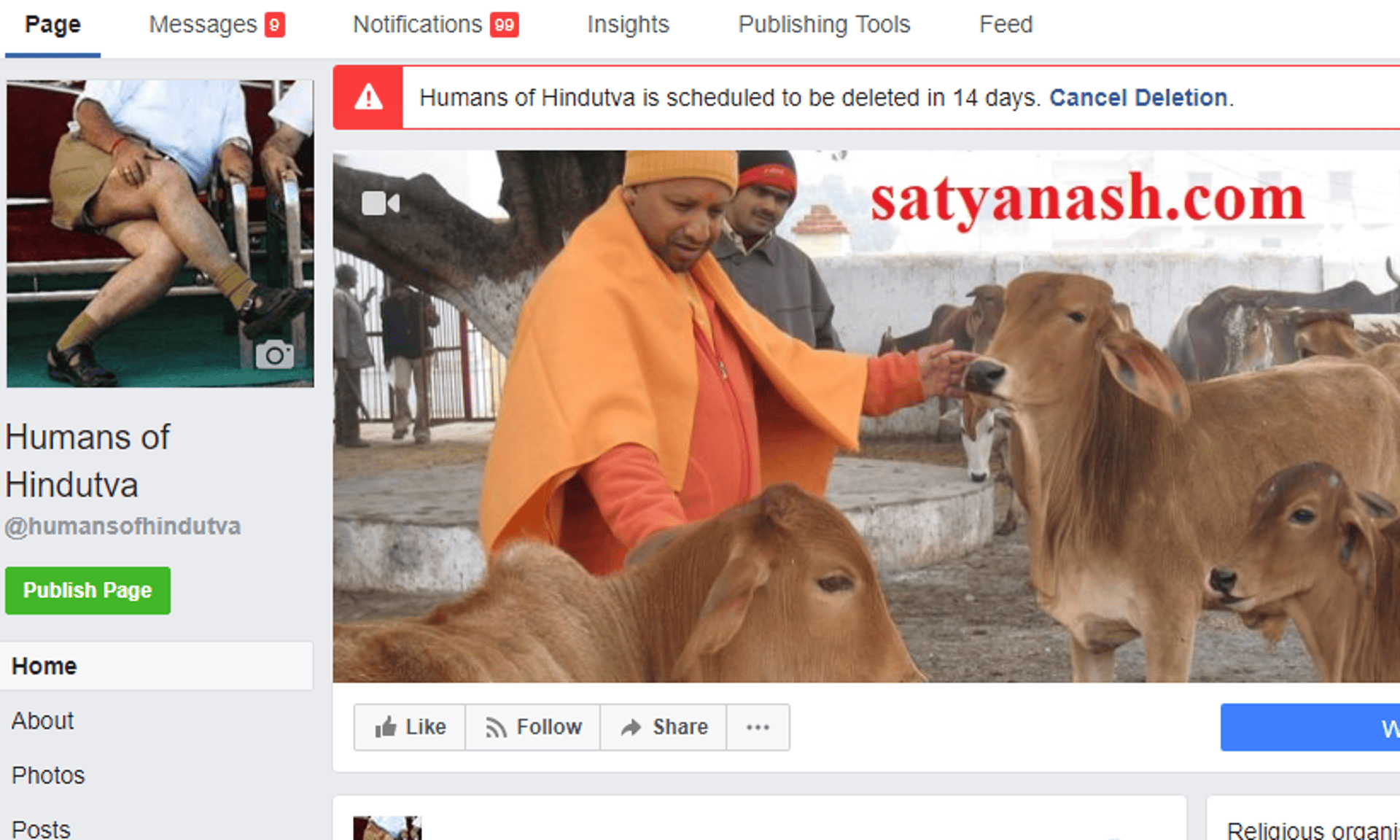 Humans of Hindutva lasted eight months: from April, when an anonymous author established the Facebook page, to December, when men starting calling his phone and threatening to kill his family.

This week, the man behind the popular Indian parody site declared “surrender”, deleting the page and illustrating the present limits on political satire in the world’s largest democracy.

The Facebook page – with a title winking at the earnest social media phenomenon, Humans of New York – had attracted nearly 100,000 followers for its blistering satire of the Hindu nationalist, or Hindutva, movement that is ascendant in the country.

Online supporters of the nationalist Bharatiya Janata party were a frequent target. “[My wife] thinks I’m having an affair,” read one April post under a picture of a grinning man staring at computer tablet. “Little does she know that the spring in my step (and my nightly exhaustion) is from telling random strangers to go to Pakistan” – an epithet regularly directed at Indians deemed insufficiently patriotic.

When the government ordered toll booth staff to stop working and salute passing soldiers, he predicted it would cause traffic jams in Gurgaon, a hub for IT workers south of Delhi. “This is Gurgaon. Every second guy wears camouflage here.”

Such open mockery of a movement whose most extreme adherents are frequently implicated in violence was bound to stir trouble. The writer maintained strict anonymity and took precautions to hide his identity.

“[But] when you have so many people after you I guess one is bound to slip up somewhere,” he told the Guardian by email. “I suppose in the current volatile environment of India, people are not ready for jokes.”

In a message on his website announcing the end of the project he said he did not wish “to end up like Gauri Lankesh”, a journalist who was critical of religious nationalists and was murdered on her doorstep in September.

Though India has a robust media and a growing comedy scene, satire can still receive an awkward reception. In June, the comedy troupe All-India Bakchod was investigated by police for posting a picture of the prime minister, Narendra Modi, modified by Snapchat’s popular dog filter.

In October the comedian Shyam Rangeela said a major network banned him from performing his impersonations of the prime minister and Rahul Gandhi, a major opposition leader, during a comedy program.

In Tamil Nadu state, where threats of criminal defamation are frequently levied against journalists, the political cartoonist G Bala was arrested in November for his “distasteful” portrayal of the state leader.

It’s not about the legality, it’s about the state not supporting you if someone chooses to act outside the law.

The previous government led by the Congress party also jailed a cartoonist whose work criticised a perceived culture of corruption in the party. But Pulkit Arora, a writer with All-India Bakchod, said the election of the Modi government in 2014 had changed the climate for comedy.

“Before, people were not as careful about what you could and couldn’t say,” he said. “You could call the prime minister a piece of shit in broad daylight and nobody would care.”

The threat did not emanate from the government, he added, but from a climate of impunity for violence committed by nationalist mobs – whose crimes, like the videotaped murder of a cattle trader in April, seemed frequently to go unpunished.

“It’s not about the legality, it’s about the state not supporting you if someone chooses to act outside the law,” Arora said.

The police can hardly protect a common man like me and the mobs are making heroes out of criminals.

Writers at All-India Bakchod were still guided by what they found funny, he said. But they carefully calculated how their content might be perceived by fanatics or the political parties who fan their outrage.

“You don’t come up with jokes that avoid [problematic] narratives,” he said. “You write the joke, and then you do your checks and measures.”

The Humans of Hindutva author said he hoped that by deleting the site he would be left alone. “It’s not easy for me to do this because I have never surrendered,” he said.

“However, I have to protect my family. Unfortunately, we live a country where the police can hardly protect a common man like me and the mobs are making heroes out of criminals.”

The site will not return, he added. “I am done with this and simply want to move on.”