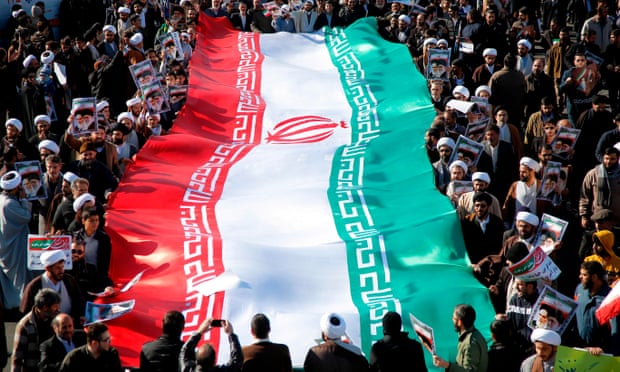 This article titled “Thousands of Iranians join counter-protests after week of unrest” was written by Saeed Kamali Dehghan and Patrick Wintour, for The Guardian on Wednesday 3rd January 2018 12.47 UTC

Thousands of pro-government counter-protesters have taken to the streets of Iranian cities after nearly a week of unrest.

Footage broadcast on national television and images published by state news agencies showed a high turnout in pro-establishment rallies, in cities that have seen turbulent scenes since Iran’s biggest demonstrations in nearly a decade began on 28 December.

State television aired a rally from Ahwaz, the capital of Khouzesan province, which showed thousands of people marching on a long bridge connecting two parts of the city, while holding up pro-regime placards and chanting in support of the establishment.

It broadcast similar footage from Ilam, also in the west of the country, as well as from Arak, in the centre of Iran.

The semi-official Fars news agency, affiliated to the elite Revolutionary Guards, forces involved in the crackdown on protesters, described the rallies as “the revolutionary outburst of Iranian people against lawbreakers”.

The commander of the Revolutionary Guards said on Wednesday it had deployed forces to three provinces – Isfahan, Lorestan and Hamadan, where most of the casualties have occurred – but claimed the anti-government protests were over.

“Today we can announce the end of the sedition,” said Mohammad Ali Jafari. “A large number of the trouble-makers … have been arrested and there will be firm action against them.”

During violent clashes between protesters and the security guards, in a week of demonstrations that has seen both sides becoming increasingly confrontational, at least 21 people have lost their lives – mostly protesters but also some security guards, according to officials.

Iranian authorities have claimed that the protests, which began over economic grievances before taking a political turn, have been hijacked by the country’s foreign enemies. The theory has also been repeated by some figures within the reformist camp, who are critical of Iran’s rulers but wary of regime change.

Anti-government protests continued for a sixth consecutive day in provincial cities on Tuesday evening, whilst Tehran was relatively calmer, with a heavy presence of riot police.

Mohammad, a protester from Karaj, a city just west of the capital Tehran, told the Guardian that the protesters had clashed with the security guards in its Gohardasht neighbourhood on Tuesday evening.

“A lot of basij militia used electric shockers to confront protesters, and arrest them – I saw them filling at least six buses full of those detained,” he said. The protester claimed the security guards also damaged public properties to find a pretext to step up their crackdown. This could not be independently verified – the authorities have made similar accusations against protesters.

“People are fed up with unemployment and being poor. There is no job security,” he added. “The protesters don’t have a leader, it’s a leaderless movement, and I call it the movement of the hungry, the starved people.”

Milad, from Shahinshahr, a city in the province of Isfahan, which has seen violent clashes in recent days, said people were unhappy with the way the city was run. “There’s a deficit in the city’s budget because of mismanagement and the authorities have instead cut down public salaries,” he said.

Major European countries have resisted pressure from the US president, Donald Trump, to sign a joint statement condemning the Islamic Republic, but have instead issued separate statements warning the Iranian government to allow peaceful protests and not resort to mass arrests.

Iran’s mission to the UN has accused the US ambassador, Nikki Haley, of shedding “crocodile tears” for the Iranian people.

EU states are concerned that Trump is trying to use the demonstrations as a vehicle to place further pressure on the EU to abandon its support for the Iran nuclear deal signed by Trump’s predecessor Barack Obama in 2015.

The EU remains convinced Iran is complying with the terms of the nuclear deal, but continued US-imposed sanctions, mainly on banks, are making it hard for Iran to gain the expected economic benefits from the deal. Trump is eager to see the deal abandoned, and sees the protests as a means of resisting what Washington sees as Iranian expansionism in the Middle East.

Trump on Wednesday pledged support for Iranians trying to “take back” their government. “You will see great support from the United States at the appropriate time!” he said, without offering any specifics on what or when that might be.

Nevertheless, faced by reports that more than 400 protesters have been arrested, European leaders have become more vocal in their criticisms. The French president, Emmanuel Macron, spoke to his Iranian counterpart, Hassan Rouhani, on Tuesday and called for restraint, his office said.

Macron also decided to postpone this week’s planned visit to Tehran by the French foreign minister, Jean-Yves Le Drian, which was intended as a precursor to a visit by Macron himself.

Macron’s office said the French leader underscored that “fundamental rights including freedom of expression and freedom to demonstrate must be respected”.

Rouhani in turn asked Macron to take action against a Paris-based Iranian opposition group called the Mujahedeen-e-Khalq (the People’s Mujahideen Organisation of Iran, PMOI), which he accused of fomenting the recent protests.

Firefighters responding to a fire at Bill and Hillary Clinton’s house in Chappaqua.

At least 25 dead in Peru as bus plunges over cliff